Jabuticaba, or Jaboticaba, may also be referred to as Brazilian grape tree and is botanically classified as Plinia cauliflora and a member of the Myrtaceae family. It is a tropical or subtropical evergreen tree native to Brazil that produces thick-skinned purple fruits that resemble large grapes. Jabuticaba is one of the most popular native fruits in Brazil. It is widely consumed fresh when in season and as a juice product and preserve year-round. As a result of its highly perishable nature, fresh Jabuticaba fruit is rarely available outside of its immediate growing regions.

Jaboticaba is thought to have originated in the Minas Gerais region of Brazil. Some species of Jaboticaba are also indigenous to Uruguay, Bolivia, Peru, northeastern Argentina, and Paraguay. Jaboticaba first made their way to Santa Barbara, California around 1904. Today Jaboticaba trees can be found growing in various Southern California locations as well as in Northern California in San Francisco and San Jose. In Brazil trees can grow as tall as forty-five feet, in California, trees tend to be shorter only growing to fifteen feet on average. Jaboticaba trees are very slow growing and can take eight to ten years to produce their first fruits.

Jabuticaba fruit has a round shape and will turn from bright green when immature to dark purple when fully ripe giving it an appearance similar to that of a concord grape. Measuring on average one inch in diameter the tough skin of the Jabuticaba offers a tannic and resinous flavor. Within the skin is a pulpy, translucent white to rosy pink flesh surrounding one to five round and flat, light brown seeds. The flavor of the Jabuticaba flesh has been likened to that of muscadine grapes, which are known for their fruity and flowery qualities. It is a cauliflorous tree meaning that the flowers and fruits grow directly from the trunks and large branches of the tree rather than from stems. They may be found in small clusters or individually up and down the trunk of the Jabuticaba tree.

The trees are dome-shaped and grow to about 11 to 12 metres (35 to 40 feet) tall. The smooth oval leaves vary from 2 to 8 cm (0.75 to 3 inches) long and have smooth margins and smooth surfaces. The small flowers, which grow singly or in clusters directly on the branches and trunk, bear four white petals. 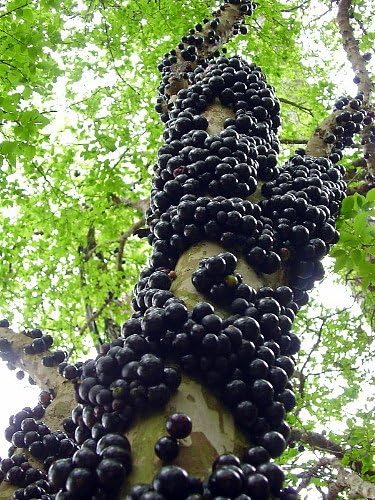 How to Take Care of Jabuticaba Tree

Light- Likes partial to full sun. Fairly wind tolerant but does not like salty sea air.

Water- Abundant water is essential to survival. The root system of Jabuticaba is somewhat shallow and watering is generally required when the upper 1 to 2 inches of soil becomes dry. Wilting and browning at the leaf tips will occur when they become too dry.

Soil- Will grow in a wide variety of soil mediums but prefers rich, slightly acidic soil high in organic matter. Our recommendation is for a mixture of Canadian sphagnum peat moss and perlite (½ and ½), which you can amend with organic matter.

Fertilizer- Acid fertilizer is best but Jabuticaba likes lots of food and will be thankful for just about anything you give it. For young plants half ratio fertilizer at monthly intervals will speed the plant's very slow growth rate. When older, any well-balanced fertilizer applied three times per year will keep the plant healthy. Because of its shallow root system, it is suggested that a series of small holes be dug and filled with organic material around the plant's base. The organic material can contain a balanced fertilizer which will be released during watering. Be sure to flush the soil with clear, unchlorinated water periodically to remove any salt build up. It is sensitive to high salt levels. 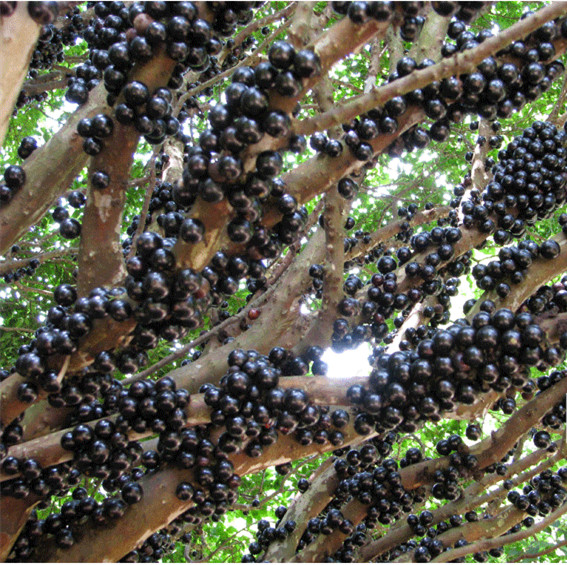 The Uses of Jabuticaba

In its native home of Brazil, Jabuticaba is popularly eaten fresh out of hand simply by squeezing the flesh out of the fruit’s skin using the thumb and forefinger. Jabuticaba can be used to make jams, marmalades, and other preserves. It is also popularly squeezed to make a fresh juice or fermented to make wine and liqueurs. Jabuticaba can be used with or without the skin still attached though removal of some or all of the skin will reduce the tannin content. Jabuticaba begins to ferment three to four days after being harvested and should ideally be used within that time frame.

In Brazil, Jabuticaba fruit is one of the richest native sources of antioxidants, specifically of anthocyanins with most of them being located in the skin of the fruit. The fruit’s purple skin contains a significant amount of tannins, water-soluble polyphenols which have been the subject of some nutritional debate as to whether they are good or bad for humans. Some studies indicate that tannins exhibit carcinogenic activity which in some people when consumed in mass can impact health negatively. Recent studies, however, show that plant tannins such as found in Jabuticaba fruit have massive antioxidant potential and are being tied to a long list of curative and preventative health benefits.

Brazilian aborigines consumed jabuticaba as a snacking fruit and used it to make a fermented wine. It has also long been used in Brazilian traditional medicine to treat inflamed tonsils, asthma, and gastrointestinal distress. In the Brazilian state of Minas Gerais during Jabuticaba season, the fruit can be found sold by a multitude of street vendors. So much fresh Jabuticaba fruit is consumed during its season that the streets and sidewalks nearby where it is sold are often stained purple from the discarded fruit skins. The fruit is so important in Minas Gerais that an image of the tree even appears in the city of Cotagem’s coat of arms, and in the city of Sabará a celebration of the fruit is held annually.